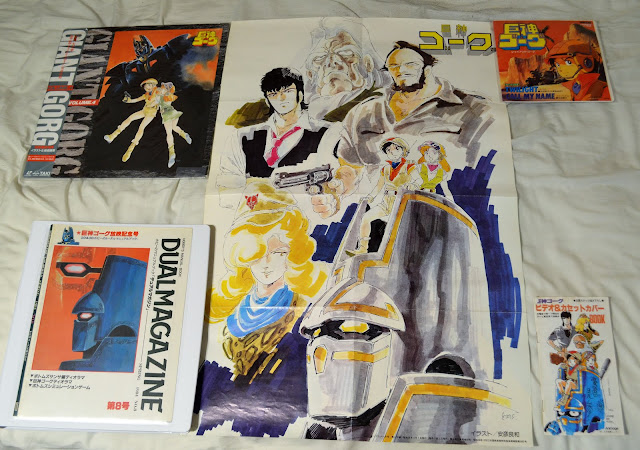 Happy Halloween! It's been a few months since the Cowboy Bebop post, so forgive me on the delay. This was a post I've been thinking about doing for a long while, and it was time I just got whatever I owned of Giant Gorg and put it together. This is lacking the DVD collection from Discotek Media, and the reason for that is I don't own that yet, but maybe I will one day. It's been years since I saw the translated fansubs of the show thanks to Skaro Hunting Society, but they dropped that when the official release came out, so they maybe floating online (I still got mine on my HD).

So let me introduce you readers on what is in this .rar file. These consist of scans from a small art book that was included in the last laserdisc of the Giant Gorg series, an issue of Dual Magazine that features Giant Gorg material (No.8 Spring 1984), an Animage booklet that contains images and a large amount of info that i'm assuming was in an issue of Animage as a bonus, and a 45 single of two of the songs in the show, along with scans of the booklet that came with the 45. Talk about a bundle!

To give a quick lowdown on my fascination with Giant Gorg went back to about when Skaro was starting to fansub the series, and its a show that the likes of Dave Merrill and other online anime reviewers would talk about often that seemed to peak a little interest in the show. After a couple of episodes of seeing it online, I wanted to get my hands on whatever I could find that was Giant Gorg related. I got the laserdisc off ebay back in the fall of 2013 to start out with. After a while, I came across the poster you see above one year at Animazement from Anime Asylum booth. After some time passing, Tim Eldred Our Star Blazers fansite had a marketplace he briefly set up for a time, and he was selling the Dual Magazine, so I got that sucker off of him. Only recently, I came across the Animage booklet and the 45 single from Otaku Joes. The major grand piece i'd love to own but "can never afford nor find room for" would be that big Giant Gorg Soul of Chogokin figure that is roughly over $500 bucks online these days, which ive seen briefly one year at an Animazement con.

I don't see my Giang Gorg collection to just stay the way it is, as long as there's some cool Gorg to be found at cons. Getting the official DVD set is on the list that I just need to bite the bullet and get, but that'll come in due time (as long as Discotek has the license). So if your a Gorg fan or wanna know more about what's out there of Gorg, then have at it with what I have on the download link. So see you next time!