There has been an update for the Scramble Wars soundtrack, where it's all online now.

The new tracks are:

So you can now all enjoy the Scramble Wars Soundtrack, courtesy of Amanda Stair Duran and her hard work! Well, catcha next time!!
Posted by Dustin Kopplin at Monday, March 28, 2011 No comments:


Remember a while back I stated I was gonna introduce someone and their stuff on here and had something of a build up to that. Well, this is kinda that post, sorta. I've been kinda waiting on one thing from her for a while and I'm not sure when shes gonna get done with that, but she did give me some other cool stuff that I will post over time. So this is a little shall you say "chips and salsa" to go with your full course hispanic dinner entree of anime goodness. And yes, I did just compare spanish food with anime, deal with it.

But what will I post today you ask? (as if my title has nothing to say about it) Glad you said that too yourself, because I can't hear you from where I am at. So what I wanna share is the Scramble Wars OST. I don't have alot of information with it other than some pics and some tracks I can post up for you the listeners. So here is the image of the cover: 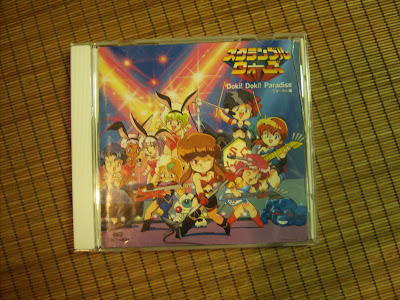 From what I can tell its the Scramble Wars Doki Doki Paradise soundtrack. These tracks include artist such as Naoko Matsui, Michie Tomizawa, Chieko Honda and many more (that have not been uploaded so far). Here is the youtube track listing thus far:

So yea, this is my update on more stuff to cover whats to come...with more stuff. 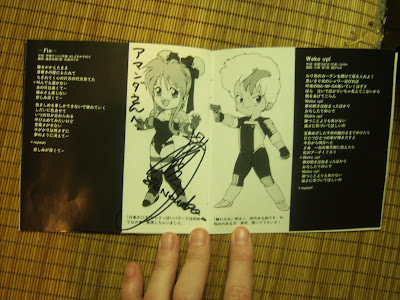 
So who is this person I'm talking about? Well, I'd like to introduce you to Amanda Stair Duran, Bubblegum Crisis Fan-fic writer and mega fan to boot!! When I came across Alt.Fan.BGCrisis back in 2009 or so, I meet some really cool fans from this usenet/google groups discussion place and came across Amanda, which is someone I find very special not only as a fan but as a person too. She's been a BGC fan since mid 1990's or so from getting into anime from her brother and her friends which led her to BGC. She also started to dive into fanfiction towards the late 90's by doing her stories of not only the Knight Sabers, but Priss's daughter, Yumeko. What I also found out about her is she is a Columbine High Massacre survivor and witnessed the events first hand. I have noticed she has put her personal feelings from that event into her writing and the personal events that took place after that. I am really glad that she did survive and got past the events that followed, otherwise I would have never got to know her as a fan and I wouldn't be doing this intro about her and posting her stuff up for the world to see (not to sound like a jerk, but her stuff is pretty sweet : ) ). So, that is my personal intro to our special guest on this blog in short.


Here is her main fanfiction website with information to all of her writing material: The Adventures of Yumeko Asagiri!!

She also does a forum with other fans from Alt.Fan.BGCrisis and some new people as well: Girls of Genaros

Well, I think that about covers it for this segment. Comments are down below, cookies are still fresh on the table and plenty to go around. So I depart now saying, Never say Die, Iron Otaku!!!

UPDATE (4/24/2018): Seeing how in the past year on the comments i've had two people mention they wanted this album, I finally got all the songs from Amanda and put them on a Mega link for you guys to listen too. Also late RIP shout outs too Chieko Honda and Hiromi Tsuru since they both passed away since this blog post was first written, so a bit of history there when listening to their voices in the early days, darn good sounding ones as well.

To continue our "Girls, Guns n' the Law" theme here at Public Access Anime, this week we look at the side of the police force where its not the size of your gun that matters, but just the horsepower your squad car can put out to get the bad guys. This week we show "You're Under Arrest" OVA where there's people saving kitties, losing their lunches, and running from the police on your Honda Motocompo.

So sit back and enjoy, as for the week of March 20th: You're Under Arrest
Posted by Dustin Kopplin at Monday, March 21, 2011 No comments:

I'm back again with another week of streaming some (not so) good anime on Public Access Anime as this months theme is titled "Girls, Guns n' the Law" as we showcase some of those ladies in uniform with guns, or just girls with guns. I mean, does it really matter what side they are on?

For the week of March 13th, we have Burn Up OVA

Also as an added bonus, I did some gameplay of Another Century Episode R for the PS3. For the used copy I paid for, must say it has all I need for a mech game.

As for content update, that is soon to come. Still waiting on some things or might have to push things aside for other stuff, I will have to see. Till next time, see you then!!!!
Posted by Dustin Kopplin at Sunday, March 13, 2011 2 comments:

Before I ever did this blog, I've been showcasing some of my anime from my collection to the internet, since about September of last year. So whenever I do an episode or "the anime of the week" kinda thing, I'll post it on here to you guys to see.

I just got done doing a "Anime Dubs from Hell" segment and will showcase another segment next week. I usually do this once a week (or try to keep it that way but, stuff happens so sometimes I may skip a week or so) and got a few followers that are interested in what I have to show. So, consider this a free way to watch of my favorite stuff that you may or may not have ever laid eyes on. Welcome to Public Access Anime!!

For the week of March 6th, we have "Macross in Clash of the Bionoids." So, enjoy!!!!

Link Here: Macross in Clash of the Bionoids
Posted by Dustin Kopplin at Monday, March 07, 2011 No comments:

"So im back! And I've been here for years, Rockin the-"... hold up, that's not the right song. Let me try that again.

Welcome again boys and girls, as it is the main man of the hour, with more crap to shove in your face. Sorry about the first part, I wanted to try and be funny (to whoever would get that song lyric). Is it funny? Surly not. Should I edit it? Perhaps. Am I gonna forget to edit it and leave it in? ... yes... my answer would have to be yes.

But I am back for post number 2 (the first one doesn't count, its just a measly introduction) as I have yet more little pieces of anime past to show. For this post I have myself another little magazine (or I guess fanzine if you would call it, you people are more than welcome to correct me) of a certain issue of Protoculture Addicts from August to September of the year 1991 with none other than... MORE BUBBLEGUM CRISIS!!!!

I came across this issue at my first Animazement (slash/ anime con) back in 2007 in the dealers room. At the time, still fresh into Bubblegum fandom, I was in the dealers room for probably a good hour (my second trip there that Saturday) and one of the dealers was selling comics (pretty sure its the same guy every year. Hey, dudes gotta make a living). The dealer had other issues of Protoculture Addicts in the bin (if memory serves me right) and I ran across this little baby in the wild. Of course when I saw this issue, I was rather shocked that I found another piece of BGC to add to my slowly growing collection ( I wanna say at this time I found the Animerica BGC issue before I came across this) and wondered how long this guy must have had this. So right then and there I used the cash I brought with me that day for the con and took it with me along with other merchandise I picked up as well.

This was a magazine that I would have to say was before anime magazines had colored pictures inside them than on the cover. And if I had to take a good guess, I'd probably say that Animerica was the first magazine to use color on the pictures inside than just on the cover. Of course if I'm wrong on this, leave a comment stating why, because it wouldn't be the first time I've been wrong on something and certainly not the last.

But this blog would not be complete without pictures, and I do have quite a "few" to share. 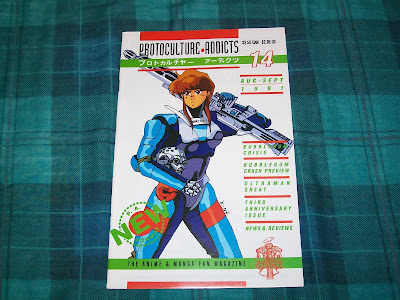 Yea, nice fan art. I guess for 1991, this was considered "good" by anime fans at the time. Sure it might look like Priss is has some "manly" features about her, with some proportions misplaced here and there, but for this time period you can't help but to let things like this slide, once in a while. Lets crack open this baby and see whats inside: 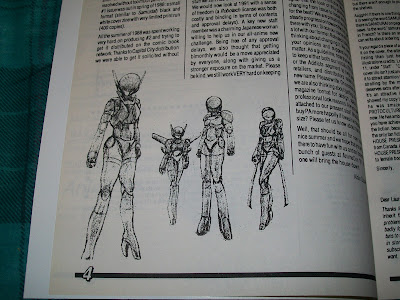 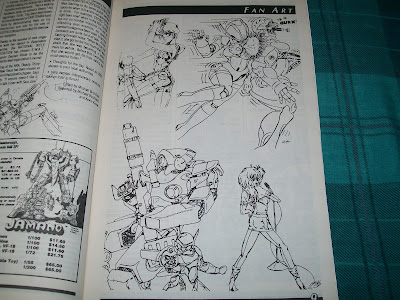 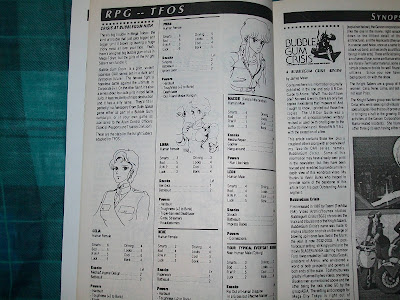 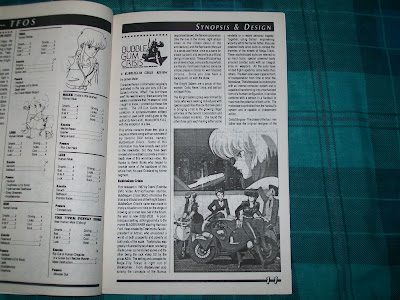 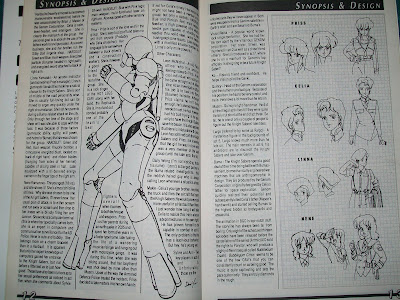 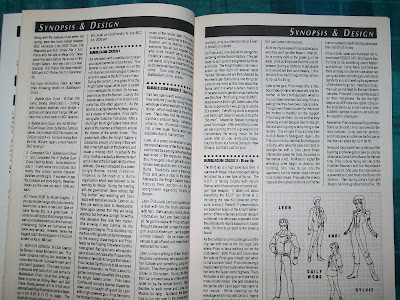 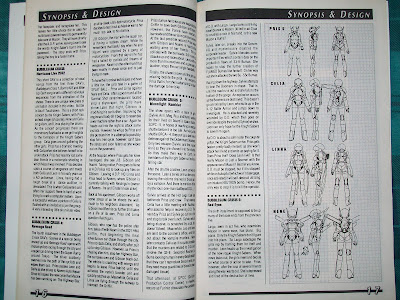 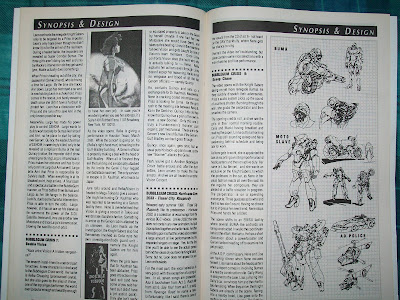 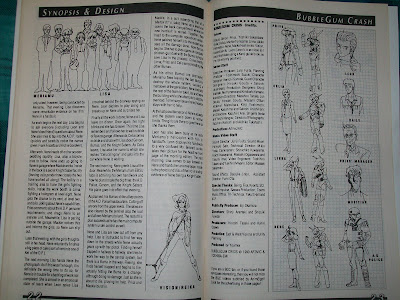 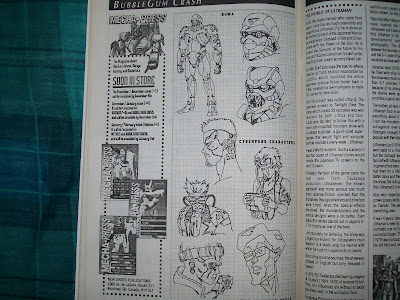 Wow! For 1991 this seemed to be a lot of information for the BGC fan at the time. Episode synopsis, fan art,  RPG info, Character faqs and bios and some talk on the two ova series (yes, including Crash). For what its worth (the picture is big enough for you guys to read the info too) you got some interesting reading material to go through. This just goes to show how passionate anime fans were to series like these and the subscribers they had. And granted, these guys were not some USA Today writers, they were just fans to make info available for other fans.

Of course, this wouldn't be complete without some good old advertising and more fan art.: 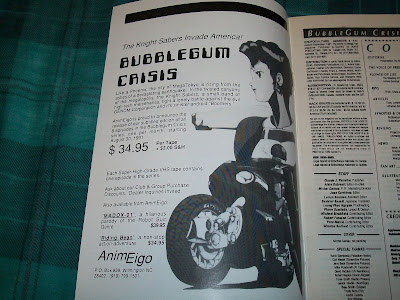 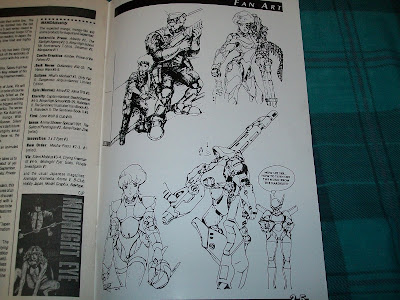 Gotta say not bad, probably in better quality than some of the fan art in magazines today (last time I checked, but I really think magazines take in some really good stuff now). Also if you notice on the last image, a little picture of Goku: Midnight Eye. How I love that OVA, and yet I have the complete manga sitting on my shelf... waiting to be read.

Well boys and girls, I think that about covers it for this post. I have more material coming up so its not like this is all. The material I have gotten is from another big BGC fan (or "fan-girl" to be exact) who has more of a collection than I do, which puts me in a somewhat envy state of mind. But I know hard work when I see it, which this girl has been a fan longer than I have. So I guess if I started the same time she did, I might be close behind her statistically speaking. But that aside, shes a cool gal from knowing her over the past year now and quite the nerd to boot. You will find out this mysterious person... next time. Take it easy.
Posted by Dustin Kopplin at Friday, March 04, 2011 2 comments: