This episode we were lucky to survive the deathly strike of Golgo 13 as we review the 1983 animated movie. This has hookers having sex, headshots, more hookers and sex, fat ex- Nazis, and CG helicopters. We also talk about some domestic anime companies and a bit more on Golgo 13. Also there was a glitch on this episode were somethings were taken out, but its nothing much.

The RADDEST CGI EVAR!!!!
Posted by Dustin Kopplin at Wednesday, November 30, 2011 No comments: 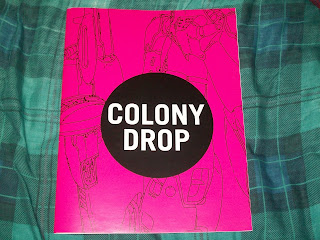 Ok so, it has been a while since I put up anything "magazine" related, I admit that. But, I do have something that is recent that I wanted to show off that EVERYONE OUT THERE EVER SHOULD GET THIS!!!! This is the Colony Drop Zine (Issue 1 I suppose)

Here is a bit of what a "Colony Drop" is. Colony Drop is a fun little blog about a bunch of guys who review obscure anime, common anime, news in the industry and there take of what the industry is screwing up on in today's world. To make Colony Drop just a bit more than the average anime-rant-and-rave blog out there, they wanted to do something so off the wall, somewhat bizarre in today's blog and publishing world, the only reason they did it is because "we think this is a cool thing so eff off weeaboo's." They wanted to make a "zine," which is something that doesn't really need a reason to be done in the past 20 or so years. But this zine is really a throwback to the "older generation" of American anime fandom with interviews of people who would volunteer at local cons, who helped published fanzines and kept up with them, and people who can draw really good fan art in a zine... for once. So I give you, the Colony Drop Fanzine: 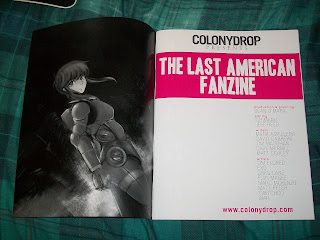 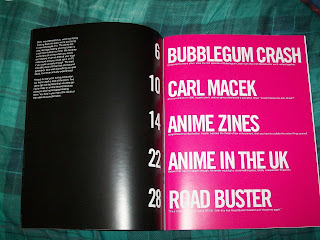 So we got our intro page, with a little excerpt on the top left from the staff there reasons in making this, which is to not relive the past, but to make sure people were reminded of it. 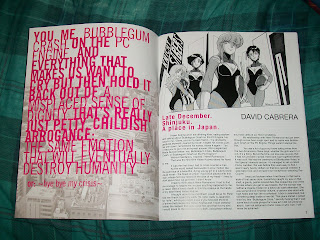 Here is a bit on a Bubblegum Crash game by David Cabrera, and how his love for a pink haired cyber hacker from the future was turned around for him with one badly done PC Engine game. 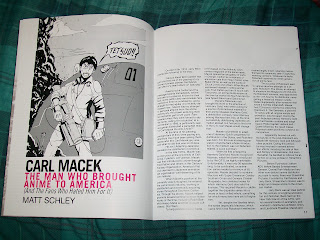 Matt Schley gives his view on what Carl Macek was able to do to the anime industry in the early days. 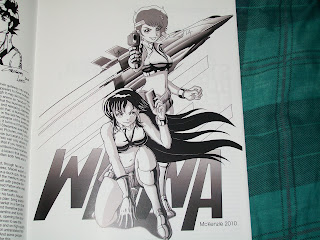 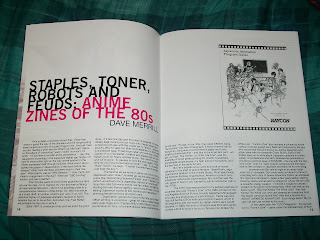 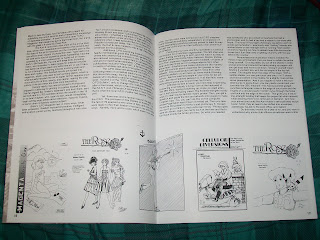 This is Dave Merrill P.O.V on the "behind the scenes" view of the fanzine world that dominated the underground reports of anime before people in the states got ANIMAG and Animerica to do all the work. This is a bit by Tim Maughan on somethings about the anime world in the United Kingdom and perhaps Europe during the same time. 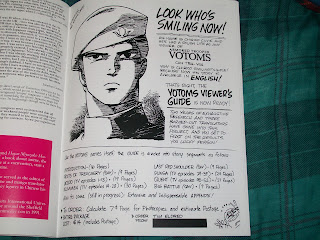 Here is a ad for the Votoms guide by none other than "great Votoms fan himself," Tim Eldred. 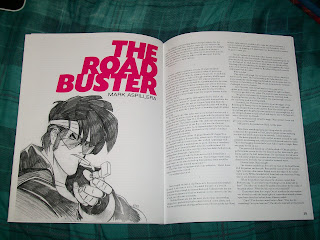 This is pretty much the fanfic/novelization of the "Riding Bean" OVA, which by reading it, just makes Riding Bean sound like a more amazing anime in it of itself. 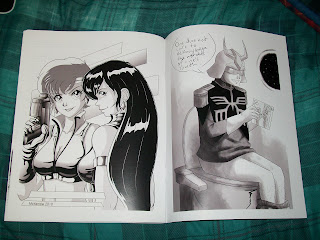 And some more glorious fanart by McKenzie... with a grand shot of Char on the can.

I was going to make this a short and sweet fun little post. And this isn't the whole fanzine, because I want you people to go and support this. I know I am a person that likes to show everything, but unlike my magazine reviews, this is something you can get your hands on (provided by the link above). So yea, support these people. I did submit something for the next issue, so I have no clue if they will publish my content or not, but here is hoping.

Well, hope everyone had a good Thanksgiving, see you next time!!!!

The Cool Kids Club isn't out of the post-apocalypse just yet as this episode is titled "Death To Ears 2: Are Listeners are already DEAD!!!!" Since we must defeat our rival brothers in the Fist of the North Star TV, we cover up to about episode 40. Along with that, I give my brief review of Gears of War 3, then we explore the world of Chris Chan and this other guy I mentioned about (in my research, this blog reported he made another blog here, and you can find some good quotes here too). All and more are on the link.


URGENT!!!!! Oh yea, I forgot to mention that I do make the attempt to throw (ok more like whore) myself out there for attention. But I made an appearance on GunDamn Podcast and did the the final episode review of Bubblegum Crash (AND BURN) for the One Pixel Jump Podcast also, so give those a look at.
Posted by Dustin Kopplin at Wednesday, November 23, 2011 1 comment:

Were back to our newest adventure with our new Fist episode titled: "Death To Ears: The Podcast of the North Star! Death To all in its Grasp!!" This episode we discuss the anime movie of Fist of the North Star, full of ATATATATATATATATATATATA's to knock you till next centuries with razor cutting fighting speeds, crucified women, using your biceps to crush statue heads, mid air men fighting on mid air horses, Mad Max biker gangs and getting back your woman from your back-stabbing karate best friend.

You can find the episode HERE!!

EVERYTHING EVER MADE EVER!!!!
Posted by Dustin Kopplin at Tuesday, November 15, 2011 1 comment:

The Cool Kids Club decide to do our own celebration of Halloween, by doing a review of Vampire Hunter D Bloodlust. Full of vampires, zombies, Vampires in Space, flying desert manatees, and discrimination against half vampires all chock full in this one little movie. We also mention our pet peeves of Netflix, anime licensing issues and our favorite anime going into obscurity.