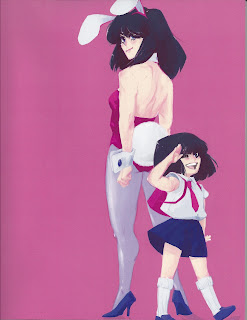 Alright so.... its been about 2 years since the last Colony Drop zine came out, am I right? Well, those deviants of the otaku culture have done it again with yet another issue of the zine, WHICH YOU CAN BUY HERE BY CLICKING THIS LINK WITH ALL THE BOLD WORDS, BECAUSE ITS KINDA HARD TO MISS IT!!!

This time around, we are introduced to the second issue of the pink color toned zine, as we get more pages, more articles, more stories, more art, and more unnecessary knowledge for you to obtain unless you can flaunt it at a con or on your own blog/podcast to show others just how smart they think you are. And just like last time, I will show part of articles, because I really want you guys to buy this and read it for yourselves. So, here we go: 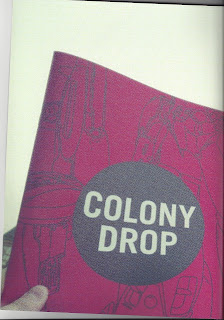 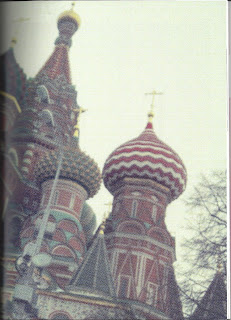 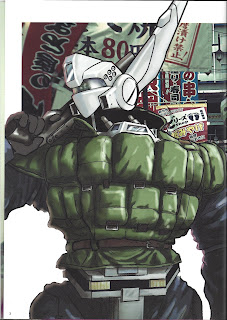 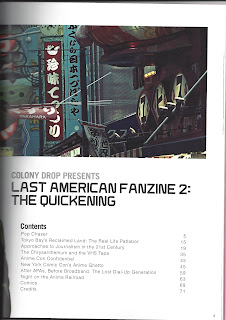 I am hearing that the next zine will be Patlabor focused, which I can dig it. And that will be in what.... 2 more years maybe? 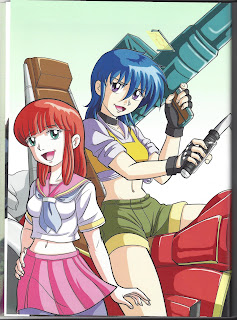 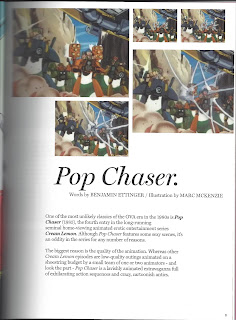 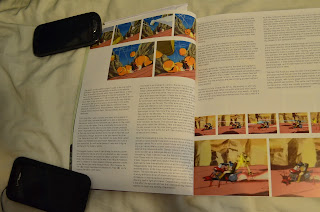 Our first article is by Benjamin Ettinger who gave us a piece about the infamous "not really but is labeled as an" adult Japanese OVA called Pop Chaser. In Ben's findings about this OVA, he goes on to give facts on how legends of anime today first got their start by getting down-n-dirty with this racy, yet fun flick about a blue hair biker girl trying to get one-night-stand-maid gal pal from a bunch of Mad Max dudes in mech suits (can you believe the guy who did Evangelion worked on this... if you believe it!) Also, I had some trouble with scanning this zine in, so I had to use my camera to get the rest of the shots, but it should be good. 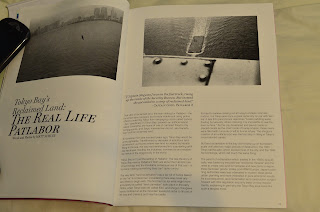 In The Real Life Patlabor article, Matt Schley writes about the development and history behind the man made island surrounding the Tokyo Bay area where the SV2 Division was stationed in the Patlabor series to give the reader a broader perspective of the environment of the series though photo and descriptions. 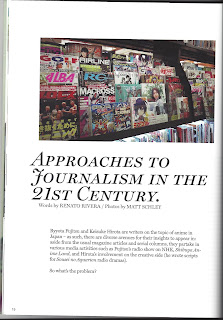 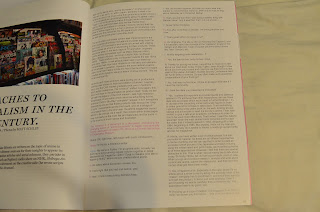 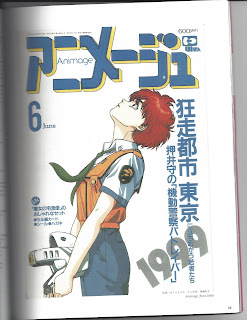 Up next, Renato Rivera gives us a typed interview between two of Japan's anime critics from the past 20 years, as he sits down with Ryyota Fujitsu and Keisuke Hirota who spend most of their time talking about the ins and outs and all arounds of the anime industry, the life of a critic, and laughing at dumb anime from the past. 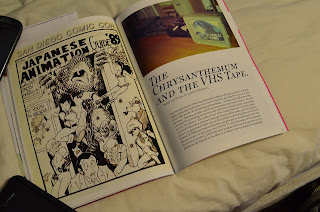 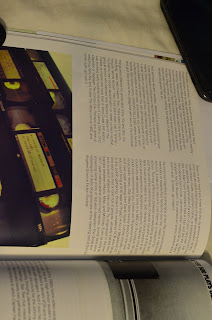 Next we have the tape master and all knowing sage of anime long ago, Dave Merrill, as he writes to us tales of pre to post Robotech fandom and the world of anime nerds before anyone really considered "anime nerds" to the masses (because people looked at them as people who liked those "JAPANIMATION MOVIING PICTURES"). Back then, they were just nerds, all under that same umbrella of Trekkies and Lucas-oids that dominated the nerd world (while getting spit on by jocks and over bearing parents). Dave "A True Anime Sage" Merrill tells us that its ok to sit in a room full of other anime nerds and watch anime together than being behind a computer screen in complete isolation from others just like you, because that is what they did back then, and they even go annoyed with each other too,BECAUSE THAT ALSO HAPPENS YOU GUYS!!! 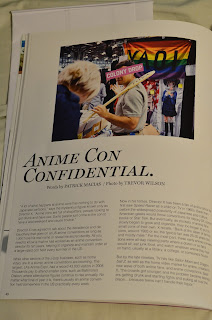 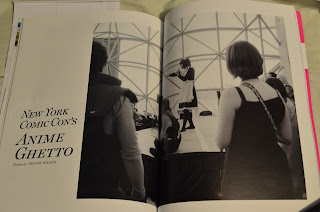 This is the photo essay of one Trevor Wilson, as he gives several photos of his findings at the yearly New York Comic Con, where you see first hand just how "ghetto" things can really be. To be honest, this is the smartest thing the convention can do for these people, and the fact that these photos portray are no different than any other convention out there in America. So by some chance if you have never gone to a con, this is what you can expect to see. 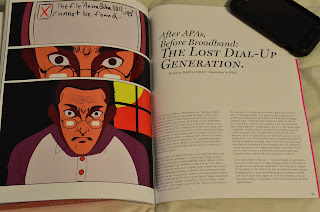 Here is an article by one piece of the holy AWO podcast trinity, Daryl Surat, who talks about this forgotten time period in the 90's that anyone just about 30 or older can remember if they had a computer and the fastest internet access 28.8 kbps money can buy... from America Online, or CompuServe, or MSN, etc. This is an interesting article, because I started using the internet at the tail end of the 90's before everything became easier and quicker to use. In Daryl article, if you wanted to know something, it was a quest that could take years to get the answer you want, or to find someone who know it. And any info you retain to this day was all because of what you knew and held dear to knowing everything about anime in the 90's. I do remember using America Online back then, and I remember writing things down on any information I obtained in my findings that I wanted to hold on too... which was mostly info in Pokemon Red. 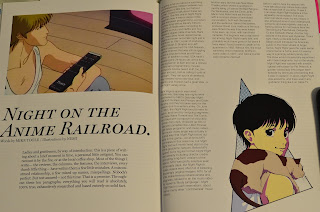 This article is done by another ANN contributor, Mike Toole, who writes about how a certain OVA gem made its way onto the late night USA Network station back in the late 1980's. This actually prompted me and my co-host to see what was so great about To-Y, so we did a review about it here. This is one of these stories that is like finding something you lost long ago that made such an impression on you, and finding it again made the memory even sweeter. 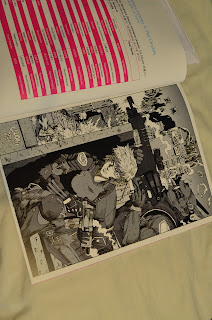 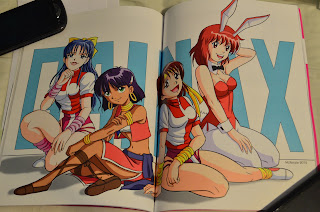 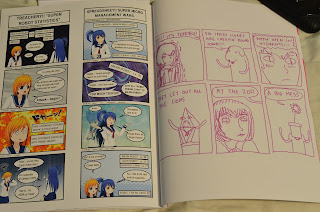 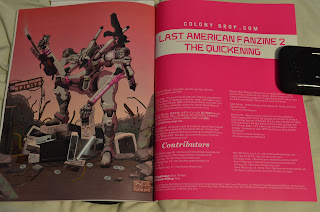 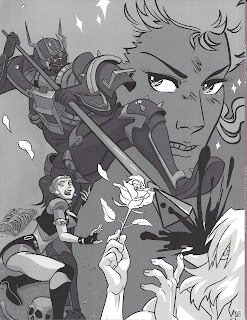 And this is the part where I end everything with artwork by contributers like Marc McKenzie, Sean O'Mara and many more all on that second to last image that you can read and check out their works. I am totally diggin that MD Geist fanart...just sayin.

And that is gonna do it for this piece of soon-too-be-part-of anime's past. Hey, at least this time I didn't do a 4 month hiatus now, so you gotta give me credit on that. And if your curious on how the sister site podcast is doing, then check it out at The Anime of Yesteryear Podcast. So far, our latest episode is our To-Y review, along with a few recordings coming, included the next part of our Tomino vs Takahashi segments. And as for me personally, I got my associates degree from my local technical college and started Anderson University for my study in Graphic Design in Fine Arts... or was it Fine Arts in Graphic Design-whatever, its all good. But anyways, imma dip out of dis joint!!!
Posted by Dustin Kopplin at Monday, September 02, 2013 No comments: