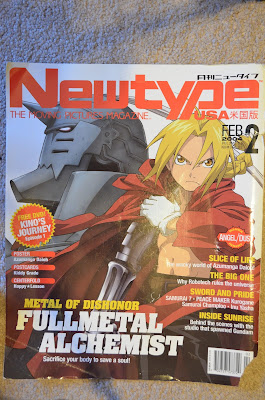 I'd figure I would do a post to bring in the new year of 2016, and to also break that 3 or so month silence I usually do for content downtime. This was something I have been wanting to scan since I started this blog almost 5 years ago, and its high time some of these issues see the light of day. There is also a bit of history I can add for my first ever posting of a Newtype USA magazine, so here it goes.

Newtype USA was my second time seeing an American anime magazine, but was the first magazine I stayed with for a year and half before eventually losing interest. When I started to get into anime in 2002, Newtype magazine (especially the issues in Japan) always fascinated me to always check it out and to own, but to this day I never have acquired a single issue. But to my surprise, I heard that in America we were going to get our own Newtype magazine, so I was pretty surprised at first. So once a month, I would take part of my lawn care money and put towards getting the next monthly issue of Newtype from my local Borders bookstore in Cary, North Carolina (which today I think stands as a fitness gym of some kind in its place). I never did a subscription to Newtype because to my 16 year old understanding, it was ideal for me to get an issue every month with the money I had on hand than to pay for a year subscription I couldn't afford at the time.

Newtype USA opened my world up in giving me variety on whats out there that would interest me. The issues would do small write ups on episode synopsis of shows airing in Japan, DVD's and video games coming out, model kit and toy reviews, nice size glossy printed posters and postcards and some good write ups on studios of interest that month. It also helped that at the beginning and towards the end of Newtype USA run, sample DVD's were included in the plastic seal of each issue so that I can sample anime shows that were coming out. I still have all those DVD's in a CD spindle on one of my shelves from the early issues that I bought. Eventually, Newtype stopped doing DVD's due to people stealing them from the shrink wrap at bookstores, which ment people like me who did the honest thing of buying the magazine to get the DVD were screwed over in the end. The thought of stealing occurred to me once, but I was a pretty honest kid, and I liked getting the magazine to read at school and at home. With the DVD's not being added in the magazine for a few issues, my interested in reading Newtype slowly dwindled to the point that I stopped buying them after my junior year of high school. It seemed that I only used the issues to read a few things in there that caught my interest, while everything else was just advertising and positive write ups on harem anime shows that I had zero interest in.

This eventually came a problem for me, as I noticed that Newtype USA was just one giant catalog of the same kind of show write ups in every issue. Newtype USA was the example of having hard promotions for shows coming out in Japan as was a way of ADV saying "Oh yea, were gonna get this property one day, just you wait!!" N/USA (im just gonna abbreviate from this point on) is looked on now as the replacement to Viz Animerica magazine, and wasn't ashamed to show how it blatantly advertised itself to appeal to the popular anime trend at the time, which was harem shows. I believe David F Smith, a former freelance writer, explained on an episode of Alpha Counter how he would have to write a positive review of a movie or show that was "complete trash" in order to positively promote a product in order for it to sell. That was one thing that I remembered about N/USA was the fact that you won't see any negativity on a show that they would promote, which to be honest was again, mostly harem shows.

However, in the mist of big boobed bad anime comedy show reviews and bigger boobed terrible anime comedy shows ads, N/USA had some areas of interest that I still remember to this day when it came to some really good articles. In this issue, we have a write up about studio Sunrise, which is mostly a collective article about how and why Yoshiyuki Tomino got his start (and hate) at Sunrise, a brief monthly write up from anime historian Fred Patton who writes up his thoughts on live action anime adaptations because a rumored Tetsujin 28 movie that maybe was gonna be made, a small write up about Ghost in the Shell 2: Innocence, and the real reason why I picked this article to scan: a write up of Robotech history. That particular write up has been on my mind for years now, so now I get to show it to the internet masses.

This issue in particular was out of my collection for a time and in my brothers hands, which is why its banged up the way it is (don't worry, my other issues are in fine condition for being in a box for a decade at this point). I plan on doing more scans of the issues I own, which were from the beginning runs of N/USA in 2003. I will say that a hand full of issues contain information about Evangelion (because that series was ADV cash cow for a number of years), including the "supposed" live action film they never made, but there's some pretty concept art to go with it.

This issue was taken from my camera, because I don't have a wide enough scanner to capture the magazine entirely. Hopefully I can get a hold of a scanner the next time I scan the next issue, but we'll see about that. Above is the download link to the file, so it's open for everyone. Hope you enjoy and see you next time, which should be on the 5th anniversary next month, but well see about that!!
Posted by Dustin Kopplin at Saturday, January 09, 2016