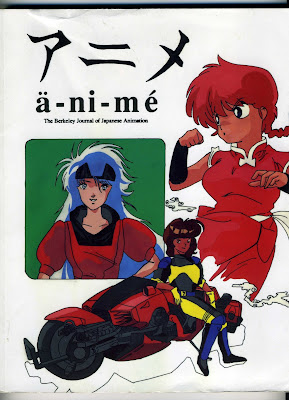 Well, now that Animazement has come and gone, I do have a gem that I got from the convention, what was from over a year ago that I haven't gotten around to scanning until just now. I also mention this story and the book in my con report from last year, so give that episode a listen if you care too.

So here is my story on that: I remember walking around the dealers room floor before they closed that Sunday of Animazement 2014, and I came across a dealer who usually sells model kits and unique die-cast Japanese toys that are at the usual prices in Japan. This same dealer also happens to sell hobby magazines and the like, which these kinda cons is where I get one issue a year from Hobby Link Japan. I remember looking at the bottom of the magazine shelf and seeing this book, which is something I had never laid eyes upon and started flipping through it. It was then that I realized it had translated transcripts and synopsis from anime series like Ranma 1/2 and Nadia, to OVA's like Bubblegum Crisis, Dragon's Heaven, MegaZone 23, Gunbuster and Outlanders.

I went over to the dealer and asked him about this book, which he told me that this was something he had and sold long ago, but had it been sold back to him sometime after. When I got home from my usual long drive back from the con to my home South Carolina, I was able to look at the book further. What I found most interesting on the back was advertisements for AnimeCon '91, including a print out of guests that would be coming, and an application to attend. So I decided to do what I normally do in this situation when I get something this cool, and that's to put it on the shelf to not be seen or hardly remembered for a certain period of time.

It wasn't until I talked to Trish Ledoux over on her Twitch.tv channel one night months later that I mentioned this book to her, which I also found that her husband Toshifumi Yoshida was credited as a "special thanks" in the book. So to my curiosity, I wondered how much involvement he had with this book? I was able to get my answer at this years Animazement when I showed him and Trish this book, which they both seemed to be pleased with this relic of the past. Toshi was cool enough to sign it for me and Trish seemed interested in wanting this to archived on the blog.

So now that the tl;dr story is outta the way, I can let you guys see this for yourselves. I went ahead and scanned everything into a .pdf file so anyone who is interested can see this for themselves. I'm not sure when my next post will be after this one, which is really to say in the coming months. Hope you guys enjoy this anime relic, and see you next time!