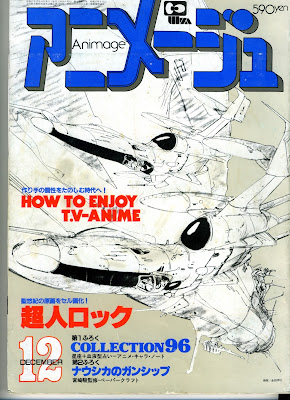 When it comes to anime magazine collecting, Animage seems to be the top tier in any anime fans collection when it comes to print media. Well, i'm here to present one of the handful of Animage issues I own from the lot of magazines I purchased from Tim Eldred last summer, and I figured with a catchy sub-title like "How to Enjoy T.V-Anime," I figured this might pertain to some anime fans out there.

This is a pretty cool issue, and set up in the same format like My Anime, with smaller booklet style pages to see fan art, manga, and interviews and articles within them. From what I saw, this has a nice write up on mecha shows from 1982 that you can enjoy with stuff on Yamato, Macross, Space Adventure Cobra, Baxinger, Dougram and many more.There is also some cool stuff on Crusher Joe, God Mars, and Urusei Yatsura. Also at the end of the issue, there is a Nausicaa manga in the back which came out 2 years before the film did, so that's a treat for any Miyazaki fan to see. So, get the file for yourself and enjoy.

In terms of a life update, i'm on summer break from school and looking forward to my final year at university (funny right, seems that as long as this blog has been going on, i've been in school the entire time). I should also mention that yours truly has an official IMDB credit, since I have been working on the Otaku no Video Kickstarter Blu-ray release starting from last summer, and I have kept my lips (mostly) sealed on that to be a surprise. I am credited for video editing, since I made a few music videos that can be seen when you try and enter in your SMOO code on the heart icon on the blu-ray menu. This post from Walk of Darkness has some of the codes listed to see mine and another video editors work in that menu, so check it out if you happen to have that blu-ray and didn't know what it was for! Things are well for the girlfriend and I, my car still runs, its stupid hot in South Carolina this time of year, and this is where things get even hotter for this election year in America. So I will part by telling you guys that I will always "give it to you" with more artifacts from the past, so see you next time!