Well, I am once again late for my own celebration... 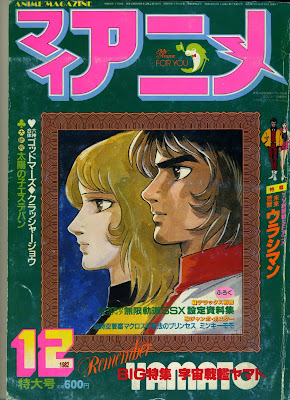 I did what I told myself last year I wouldn't do again, and that was post after February to mark the 5th anniversary of this blog. Maybe... I won't do that again, but we'll see about that.

This time I have a treat for you guys, since we are moving away from American publications and onto actual Japanese publications of anime magazines. I got an handful of Animage and My Anime from Tim Eldred back in the summer, and I have been planning on posting one of those issues up on the site for sometime, so I figured I would make this occasion special. This issue is chock full of anime that was running in 1982, like Fang of the Sun Dougram, Future Police Urashiman, God Mars, a piece on Super Dimensional Fortress Macross, Space Runaway Ideon, Space Adventure Cobra, something on Crusher Joe, and a ton more from that time. That only makes up half of it, since the later consist of content around Space Battleship Yamato, anime staff interviews, and a whole lot more to boot. This is a true time capsule going back 34 years at this point. If you happen to like what you see and want to translate any of it for tumblr use or whatever, go right ahead. If you do, let me know since I'm curious on what it says too. So enjoy this latest treasure from the past.

Nothing huge in terms of life updates, still with my girlfriend, still in school, still planning on going to the same anime conventions that I do (Anime Weekend Atlanta is on the radar, and I am in the process of working on panel submissions for them), that's about it. There is one thing I would like to mention, but that will have to come when the release of Otaku no Video comes out to the people who backed it, so hopefully I will remind myself to say something about that in the next upcoming post. In the meantime, Riding Bean Kickstarter got funded in 2 hours, which I'm planning on having a part in working on that. Sorry for not keeping my promise, maybe there's next year eh?