I think to any Bubblegum Crisis nut out there, this is for them. Back in the early 1990's, the next wave of anime started to hit our shores (after some waves in the late 70's/mid to late 80's) with AnimEigo little pop hit number, Bubblegum Crisis.

By this time, BGC (the internet abriv. way of saying Bubblegum Crisis) was becoming popular in the states and was already having a good following in japan by that time. By then there was a Turbografx 16 game "Crime Wave", VHS and LaserDisk copies of the OVA series, and added with some soundtracks that made you sing your Rock Me's and knowing that Tonight, there was a Hurricane coming to your eardrums.

Now granted, the only kinda of BGC material I have on me at this present time is the Remastered DVD set, an episode guide book, the Yamato Priss Motoslave, The Atelier Sai Priss, a limited edition Priss Chromo Cel, Kenichi Sonoda Artworks 1983-1997 artbook and the R Talisman RPG books, all 3 of them. But who can forget this little issue of Animerica, taken from a comic shop (Foundation's Edge) off NCSU back in the summer of 2007: 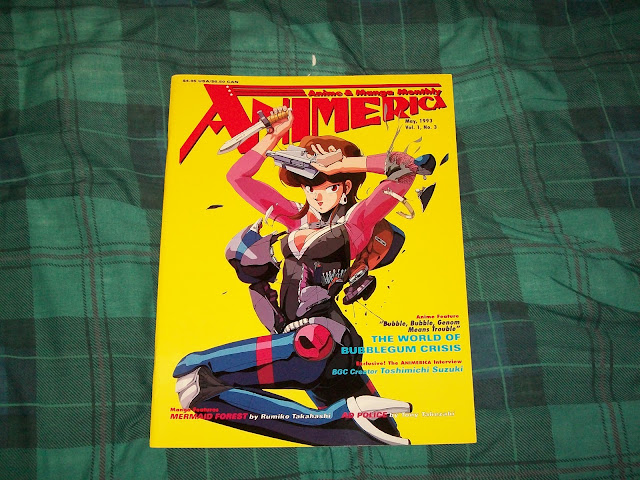 I remember finding this in a anime magazine bin next to the walk way for the register, along with a box or so of other Animerica mags and other anime magazines (which I will show in the future, dont you worry) and holding something that only a fanboy can describe getting a piece jewelry from King Tuts tomb. You know that feeling when you find something that you have been longing for, out in the wild where it seems you and only you were destined to find and retrieve. Thats about how I felt at that moment, just alot more.

Included in this gem is pictures of the interview with Toshimichi Suzuki, the man who was behind this OVA series. I remember a long time ago I wrote up a piece of that interview online to a forum, but recently remembered I did it, then moved it here for the haven of Bubblegum nerdom, Alt. Fan.BGCrisis. I should finish the rest, theres no excuse for it. I mean after all, I am doing this blog.

Here are some of the pictures inside the magazine with the article, I hope people can be able to read it. 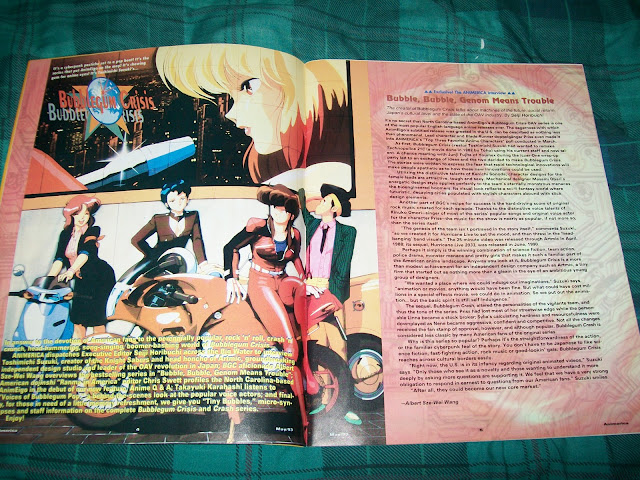 Oh yea, I also noticed some of these ads inside the magazine too. Remember how much VHS cost:? Yea, I am amazed it cost as much as today Bluray's and DVD box sets of entire series. Ha, you kids have it good. Back then, it was AT MOST 2 episodes of an anime series on VHS for the same price as some of you whipper snappers are griping and complaining about how you cant save up your lawn mowing money for an entire season of Bleach or Naruto at your local Wal-Mart (To be fair, im waiting for Gundam Unicorn "aka as I wanna call it, UniCRON" to be a bundled series on bluray, at probably over 100 bucks). 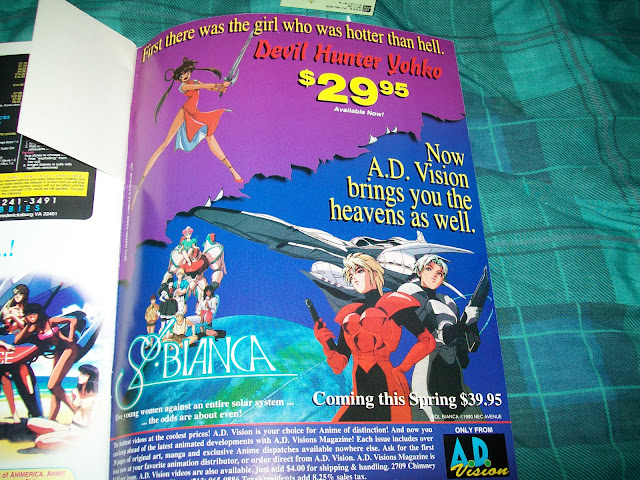 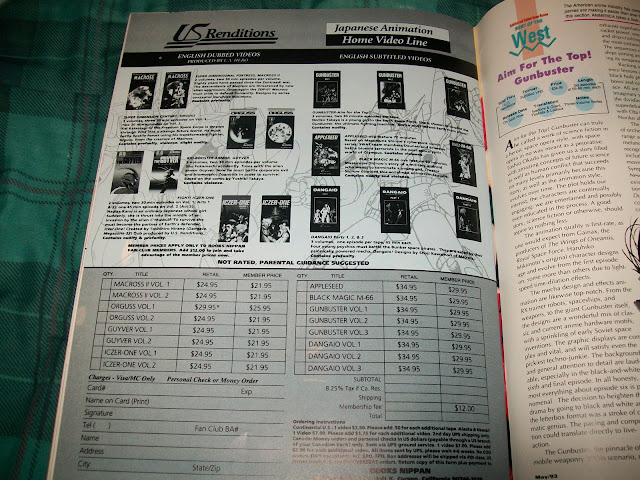 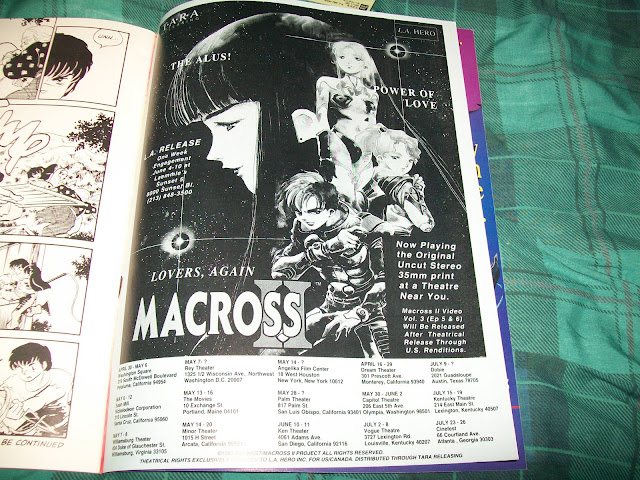 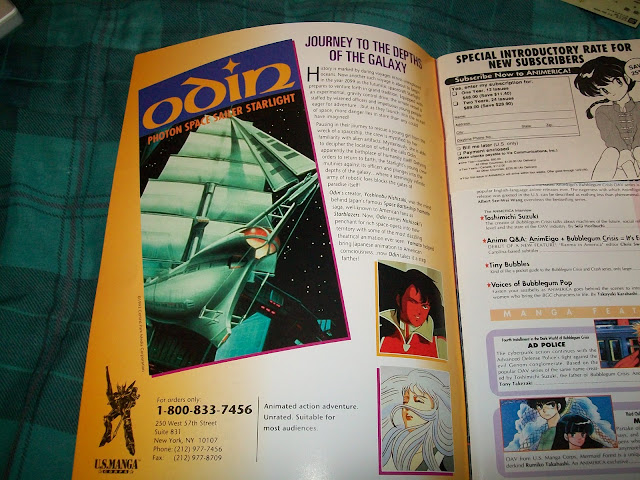 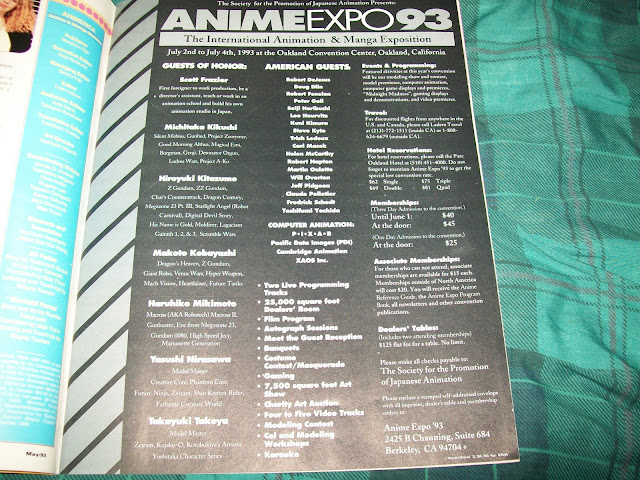 I do have a copy of Sol Bianca, and I love that OVA series. And, I did pay 30 bucks for that tape in 2003 or so at Coconuts before the VHS market crashed (before the FYE in Cary NC took it over, which was before that got closed down which that was before it became some furniture place. I dont know, I go to that side of town once a year now)

So yea, there you have it. I don't know the rarity of this issue or how sought after it is. But, I have it, and I am content with this anime relic.

Oh yea, this issue is also autographed by the Editor of this magazine, Trish Ledoux. I had her sign this baby at Animazement '09 along with a few other issues (that I can post later in time). Heres a picture for proof: 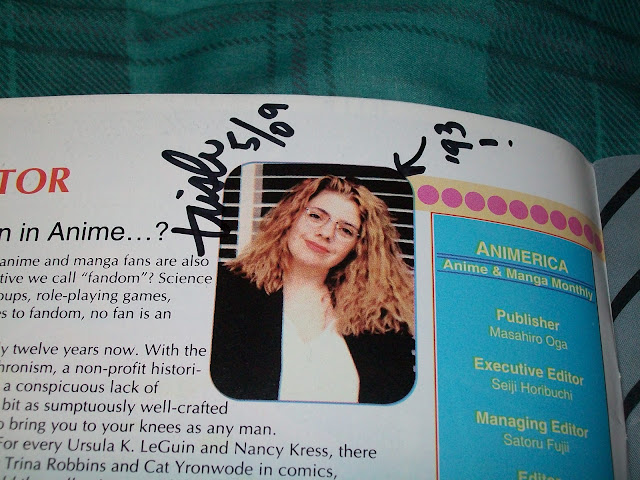 So yea, the premise of this blog started with a dream (within this past week) to show somethings I have, that I treasure and that I used my hard earned cash to obtain, all because I am a fan and I like this kinda stuff. And if the "Otaku Expiration date" is true at the age of 30 (Quoted from the podcasting pioneer of his time, Daryl Surat), I've got about 5 years to tell my tale and my story for the next generation, before I wake up on my 30th birthday and look at what I have and say "I need to sell all of that to pay my dumb mortgage this month and get that Corvette I've always wanted." I'm all for a Corvette (1970-ish ZR1 model to be exact) don't get me wrong, but I am content with my Caviler I have now (a Chevy is a Chevy after all) so maybe one day.

My brief background history on my fandom to Bubblegum Crisis started when I graduated high school in 2005. I remember that summer working for my dad helping build apartments as a 7 an hour labor and saving some dough (if it wasn't being spent at the arcade in Crabtree Valley Mall playing Initial D or Wangan Midnight) and I got into BGC, from the music. I had my crappy (but reliable) Virgin Pulse MP3 player and sticking in a SD card chock full of songs from the series and used that to listen to while either sweeping or prepping units to get ready. I remember how the music made me feel at ease and it eventually lead me to get into the OVA series I got online. I watched it a year or so previous but didnt find it that great at first. But after watching it again, it just hit me. This was something I absolutely enjoyed. It also lead me to sell my Tokyo Marui Famas F1 to get the Atelier Sai Priss figure (and vol 1 of the individual releases of Zeta Gundam on DVD). Over the next few years was me getting into whatever I could find on BGC related info and merch. I found sealed copies of the Hurricane Live VHS tapes at the Raleigh Flea Market one saturday (bout 2006 I think), and found the remastered dvds at Animazement '09 for a good price. To me, it is my number one anime series and my most favorite (Gundam is a hair below it at number 2, even though that came first long ago) and will continue to be till I probably die.

Well, if you enjoyed info like this and long back stories to things like this, then this maybe your blog. Ill get what I can out to the public when I can. Thanks for dropping in, and hope to see you next time!!!!
Posted by Dustin Kopplin at Saturday, February 26, 2011