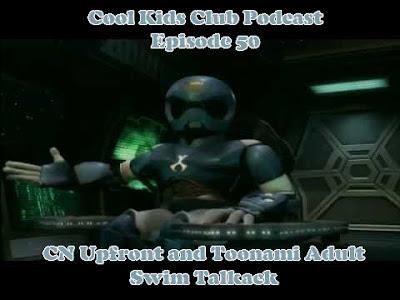 Episode 50 OH MAI GAWD!!! We embark this historic event with us talking about the latest CN Upfront report where we discuss the shows on the list, and also talk about the best Adult Swim April Fools joke ever!! This is pretty much us going back in time (Back to the Future style) when it comes to us talking about Toonami. All this and more in this weeks episode! DaftPunkFan comes back to join us after a long absence (on his accord) as our returning co-host (but probably not for long).
We also get to mention things such as:
-Comic Book talk
-Tim and Eric/Check it Out
-Wonder Shozen/PFFR stuff
-Mobile Frame Zero
- The aquabats super show
- We (tried to) made our own Toonami list
- Mention Cartoon Planet

BONUS!!: We also got some extras to this episode that cannot be played, CHECK IT OUT!!!!

BONUSx2: I need to mention we are going bi-weekly till June-ish, so we will post episodes about the 2nd/4th weeks of April/May just as an FYI for you guys.