It's been almost a year since the last Animerica, but better late than never... 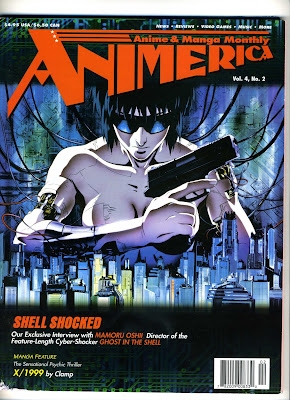 I've been meaning to get this out for months at this point, but better now than later. I say that because November 18th will mark the 20th anniversary of Mamoru Oshii Ghost in the Shell. And what a better way to celebrate an occasion on this site by having a scan of the Animerica issue it's based upon.

I first saw Ghost in the Shell in high school when I was able to rent anime from Blockbuster, and I wasn't too sure about the film other than looking at it as another "right of passage" to becoming an anime fan at that time. I have seen the movie a couple of times here and there in the past 13 or so years since my first showing, but it wasn't until last semester when I saw the film again for my Contemporary Art class, where I discussed essential films by Mamoru Oshii. Thanks to the help of the film and Brian Run book Stray Dog of Anime, really helped me understand the film in a much different light than I had before. There is also an article on studio Gainax, Street Fighter II, and much more.

This is also a good time to point out that I am putting out this issue as a .pdf file instead of filling up my blog post with tons and tons of pages. I have been wanting to do that for a long time now, and with it being almost 5 years too late, better start now than later. This was also an issue that was autographed by Trish Ledoux at some past Animazement, and I am not even sure where I found this issue to begin with. It might have been at a local con for all I know years ago. Also, the corner of the book has some wear on it, and you can thank my cat Bubbles for wanting to chew on it because she is a dumb cat. The interview with Oshii by Carl Horn at the time this issue came out is really interesting to read, which I have lifted quotes from Oshii in the interview for my school project, which was most helpful.

The next release might either be during Christmas, or on our 5th anniversary, who knows at this point. But I will go ahead and let you guys enjoy your post-Halloween blues.
Posted by Dustin Kopplin at Monday, November 02, 2015