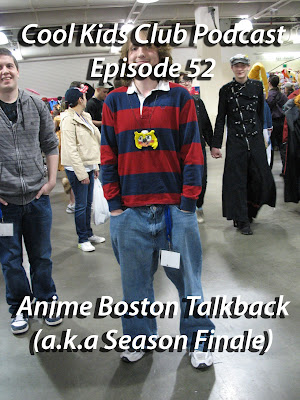 Hey gang!! In anime terms, this episode would be considered the final one of the series, so we have quite the doozy of everything coming at you in this episode. This week we have past co-host DaftPunkFan join in with his crew in Beastie Boys style where they mention what they did at the convention (starting at 14 min in), which includes talking about hot cosplayers, getting yelled at by authority, getting knocked in the face at the rave, drunken nights at the hotel, people who have make bad panels, and much more. We also go off topic a bit to talk about the military, internet people we know and the events around them, people making meth in Wal-Mart, internet memes, movie talk and the (now old) news of how Chris Chan popped his cherry. This and much much more in this weeks installment.

HAWT NEWS!!: Speaking of "series finale" type shows, the podcast is going through a transition period right now to go on to do something else. I can't say everything for right now, but more news on this will develop later this week, I will keep in touch with you guys.

We dedicate this episode to MCA/ the Beastie Boys.